I will never forget my road trip in Uganda! The southwestern part of Uganda indeed it’s a breathtaking moment in life very difficult to forget. On my way to the south of the country, it become very clear immediately that this country lives up to its name ‘’ the pearl of Africa’’. Since Uganda is […] 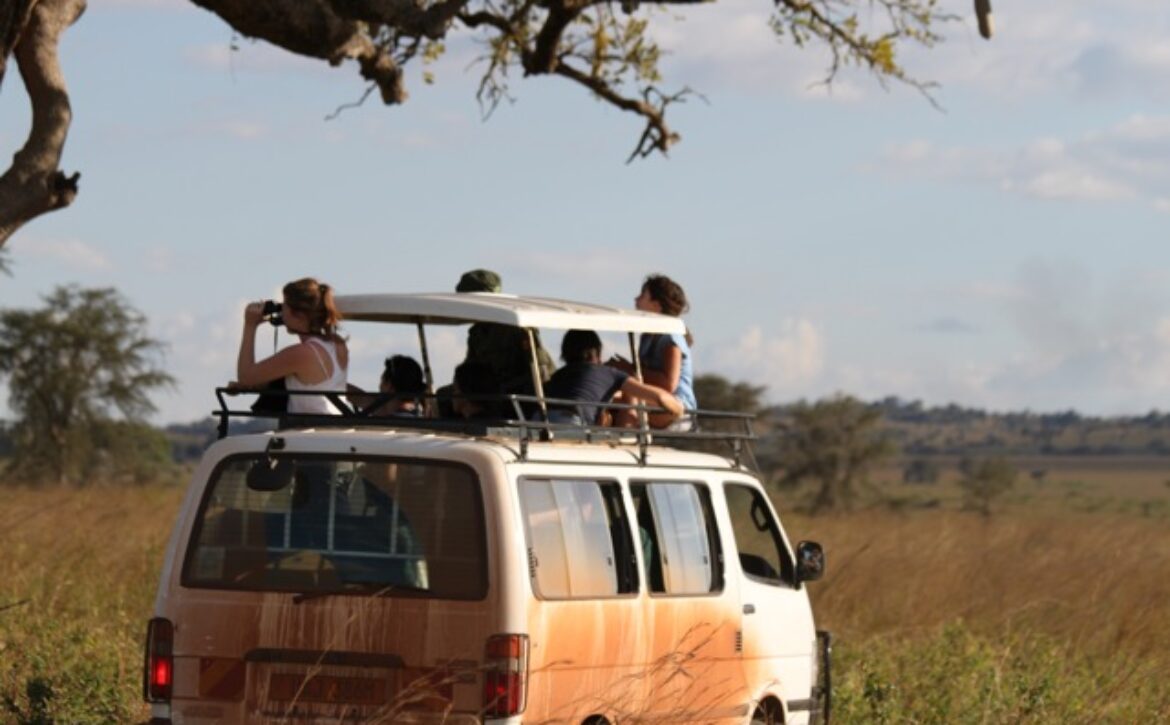 Our car shuddered to a standstill beside a wooden sign on a deserted western region part of Uganda road. “This is fountain of the pearl of Africa”, I read as I stepped from the car into the shimmering mid day heat. We’d been heading through Queen Elizabeth National Park towards the Uganda-Rwanda border, to a town called Kisoro which boasted of a very conducive climate for a night. Unfortunately as we rounded a bend I was faced with a rock slide in progress and totally misjudged the clearance of my rented car from Uganda Self Drive a reputable car renting company in Uganda opting to try and drive over the bouncing debris. There were a series of sickening thuds and bangs which caused my partner and I to cringe, and the car to grind to a standstill after around a hundred yards, with an alarming flow of unidentified liquid pouring onto the road surface.

We both looked under the car at the damage, then at each other then down the long straight road ahead of us. On average we’d been passing another vehicle about every half an hour and we were around an hour’s drive from our isolated hotel. Around ten miles back down the road, we’d passed a small garage at a cross roads, with a sign which read ‘this shop protected by a sawed off shot gun 3 days per week. You guess which days’. We’d also seen a hand painted sign pointing to the hills reading ‘Ghost Town Road’. That was the only sign of life and it looked like we could be waiting for some time to be rescued.

After about 20 minutes, with my partner berating me for my lack of driving judgment as we sat in the now roasting car, the air conditioner having failed with the engine, I notice a speck on the horizon, tailed by a large dust cloud.”Told you we wouldn’t wait long”, I said, trying to sound optimistic. It took around 10 minutes before I noticed that I had to do some thing very fast. I reached for my mobile phone, called the car rental company from which we had hired the car. This company is so generous that it contacted it’s area agent and with in a blink of an eye a rescue car was at our footsteps and we were 0ffered another car and off we proceeded with our journey.

Archie the mechanic suggested we call the rental company and we were eventually put through to the nearest outlet, In Midland, which was about 250 miles away. It took us some time to convince the rental company clerk that there was no Chevrolet dealership nearby who could recover the vehicle, and that in fact there was very little at all between our location and where he was, around 5 hours drive away. He agreed to send a vehicle transporter which would recover our car and deliver a new one, though providing an address was something of a challenge – ‘From the crossroads, over a hill, round a bend, through a rockslide, along the road a few miles, by a sign. Yes the sign says something like ‘Beware of Mountain Lions…’

Try the Ghost Town’ suggested Archie, pointing us into the distant hills. ‘A Few of the people who live up there have no water so they go to the hotel to fill up. You might get lucky.’ And so we set off into the hills under a blazing sun, remembering the Mountain Lion sign and jumping at every snapping twig.

Eventually we arrived Kabale town which is at the border of these two countries for at least a night before embarking on our journey. Reclaimed by a hardy bunch of artists, musicians, loners and eccentrics. Today, Kabale boasts a couple of eating options, some shops and lodgings and as we trudged, sweating into town we were greeted by the site of a graveyard with tumbledown tombstones, a few scattered dwellings in various states of disrepair…and the Starlight Theatre. An incongruous sight in this far flung corner of western Uganda, the Starlight had once provided entertainment for the miners and their families. Now it had been converted into the Ghost town’s only bar, and its appearance was so unexpected I almost expected it to fade, mirage like, from view as we approached.

There are some meals that stick in your memory. Sometimes because of their quality, but often because you were so hungry that whatever you ate would seem like a sumptuous banquet. Similarly with drinks. On an occasion where your mouth is parched and dry and you feel that you’ve perspired every last bead of sweat from your body, an ice cold beer can live as long in the memory as a bottle of the finest champagne. And so it was with the icy bottle of Shiner Bock which I threw down in one gulp in that strange little bar.

The room was populated by a number of bewhiskered characters who all looked strangely similar to the mailman… in fact one of them was the mailman! He raised an arm in greeting, while some of his drinking buddies glanced in our direction but barely raised a bushy eyebrow. It seemed that two sweaty, red faced, stranded travelers stumbling into their local bar was a regular occurrence. We sank a couple more cold beers and began to consider how we’d get back to the hotel to await delivery of the replacement car. It seemed that no one was making a water run that day so we headed back to the Main Road.

After around 20 minutes, a VW Beetle of late 60’s vintage, rounded a bend and chugged towards us. It was driven by a middle aged woman with matted hair, accompanied by a scowling teenage girl in the front seat and a snot nosed toddler and two exuberant dogs in the rear. As is the custom in the middle of nowhere, the car lurched to a halt, and the woman leaned out to ask where we were heading. She shook her head at being told our destination, telling us she was heading to ‘a rock’ around half way along the road. “I can take you there if you like” she drawled “you could even walk from there it’s only about 15 miles”. Intrigued by the prospect of visiting a rock in the middle of nowhere we climbed aboard and she introduced herself as Jessie. Noticing us scratching after a couple of miles, she looked in the rear view mirror and shouted ‘The dogs have got fleas and they sleep back there’. The toddler beside us, Marvin, grinned a toothless smile and scratched away beside us.

After around 20 minutes we rounded a bend surrounded by low cliffs and Jessie stopped the car. The family disembarked and we followed. Jessie opened the boot and produced three bouquets of flowers which she thrust into the arms of the still scowling, nameless teenage girl. We all headed towards a large rock which threatened to encroach onto the carriageway. It was decorated with paint from a number of vehicles and at its base were a scattering of long dead blooms which Jessie brushed aside with a once white training shoe. “My man wrecked his truck here last year”, she explained. “We’ve just popped by to say hello”. The teenage girl held her younger brother and squatted by the curbsides as her mother placed the flowers whilst singing an unidentifiable Country and Western tune. Feeling uncomfortable at being present at such a private moment, we thanked Jessie, bid the family farewell and set off walking along the road in the direction of our hotel which, as had been pointed out, was only about 15 miles away.

We’d been walking about 20 minutes when a distant rumble heralded the arrival of our final lift of the day- a battered blue pick- up truck with a white haired, mid 60’s woman at the wheel. The flatbed of the truck was full of water canisters so we squeezed in the cab alongside her. Her name was Margaret, and we were in luck, she was going to the hotel to top up her water supplies. She was wearing two odd boots, a pair of dungarees that had obviously belonged to a giant, and a pair of John Lennon style spectacles. She was also drinking from a can of beer and had a carrier bag of ‘refreshments’ in the foot well of the cab. She handed us a beer each and we set off, with Margaret entertaining us with tales of her freewheeling life. A true Hobo, she’d lived all over the world and now lived in a shack in the hills with a large hole in the roof which she told us “Don’t matter anyway, ‘because I sleep out on the porch all year round”.

Margaret approached driving as she approached life- with a ‘devil may care’ attitude, and we flew round corners on the wrong side of the road, with Margaret struggling to turn the wheel as she hung onto her tin of beer. She’d swig off the last remnants of the can with a slurp, hurl the can from the window and retrieve a replacement from the bag at her feet. Bumps in the road didn’t seem to register with this aged rally driver and we regularly seemed to take off, car chase style, and land with a bang as beer sloshed onto the wind shield from our 3 cans. It was a relief as we finally screeched round a bend and onto the hotel’s gravel car park in a cloud of dust.

We helped Margaret fill her water cans and limped to our room to await the delivery of our new car. We were hot, hungry and dusty and ached all over. We’d trashed a car in the middle of nowhere, drunk in a ghost town bar, been bitten by fleas and driven home by a drunken pensioner. But we’d had a classic road trip day – meeting interesting characters who helped us out of a tricky situation. The only disappointment was that we never did get to see that beer drinking goat!